The #2 most viewed post is from last year–2014. I have no idea why it surged in views. Were people searching “emoji”? Fizzled bulls? Or–God forbid–“huffing”? I don’t know, but here are The Rest of the Storys to the farm “news” in the post:

Barn cats have a short life span and the three kittens pictured have already passed into that place where all good cats go. The black and white one–dubbed Dottie–lived a short but happy life with my nieces until she disappeared, I believe. I suspect coyotes got her. The yellow and white one was killed in a traffic accident. I believe her name might’ve been Daisy. The yellow kitty was named Sunny until she chewed off her own tail! and was then named Stubby. She became the mother to three kittens, one of which she ate, one which drowned in the horse tank, but the other–a fine white feline named Flash–survives at this time. Stubby, unfortunately, died in a traffic fatality. I miss her, she was a nice cat.

Nellie’s broken leg healed up and she hasn’t tried to bite any more tires, as far as I know. Presently, she is in a knocked-up-by-a-nincompoop condition and should have her puppies any day, now.

The fizzled bull did, in fact, go to a slaughter buyer at the livestock auction, and I’m confident provided many pounds of excellent beef protein to the consumer.

The grandson, Roper, still swims like a fish and Gramps and I are still proud of him.

And now, the #2 most viewed Ranch Pen post of 2015, Huffing Emoji and a Fizzled Bull At The Ranch Pen.

The blog suffers at times from blog stinkerosis, also known as, the-old-gal’s-got-too-much-goin’-on-and-her-head’s-about-to-explode-look-out!. It’s a real condition. Look it up. You’ll find it under C for crazy ladies. Anyway, to get us off the fourth of July post I’ll rake through some bits of this and chunks of that to see what turns–Oh, hey! I found out something interesting. Anybody with an iPhone emoji keyboard ever wondered what this emoji thing is? 😤 My eyes are going the way of the rest of me, and for the longest time (at least a week or two,) I wondered why that emoji thing was chewing on a sock. However, daughter-in-law #2 asked SIRI–our professional nag–and she said the emoji is: Huffing with anger face.

A quick internet search revealed the emoji actually has steam coming out its non-existent nose, which I totally get, now, but I am going to call my emoji, Oh, put a sock in it, why don’t ya?. 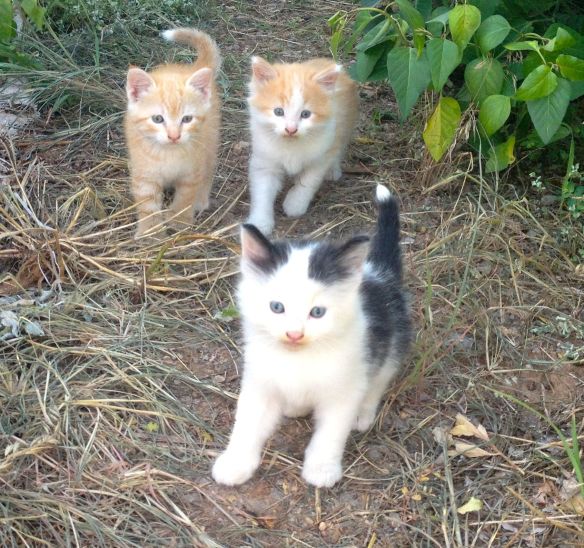 Then we have the barn cat, Tip’s, little fuzz balls. They are fat as butter. If they’re half as good’a cats as their mother, we’ll never have a rodent problem again.

And Nellie, the three-legged dog on the eve of cast removal. Let us hope she has grown a brain in the past weeks and won’t try to bite tires again.

Gramps gathered a bunch of our cows last week for “preg” checking, only to find they were what is called “open”, meaning not bred. Gramps hauled the herd bull up to the clinic to get tested, only to find the bull had fizzled. A lot of things can cause the fizzle such as injuries or ill health, but the bull was hale and hearty, in the prime of his life, and a Don Juan among bulls, yet…nothing. To save Bully’s feelings, I won’t include a picture of his microscope slide. Since the bull weighs almost two-thousand-pounds and we don’t keep herd bulls for pets, he will be off to the livestock auction where a slaughter buyer will purchase him and he will be converted into many pounds of juicy, hormone-free and grass-fed hamburger. 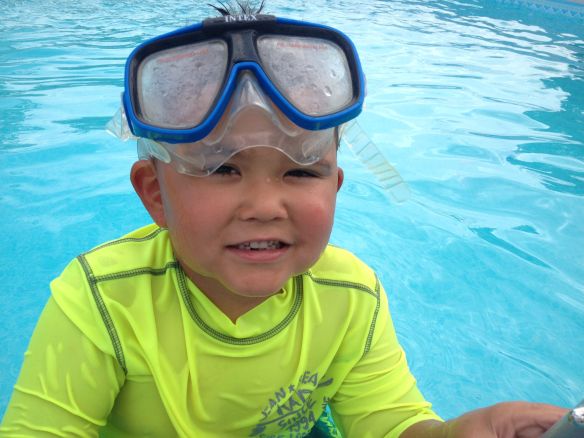 And finally, a picture of the grandson, Roper, who triumphed over his terror of water a few days ago and now swims like a fish. We are really proud of him.

As always, thanks so much for reading. God bless all y’all and enjoy The Gardiner Sisters doing a beautiful job on What Child Is This.