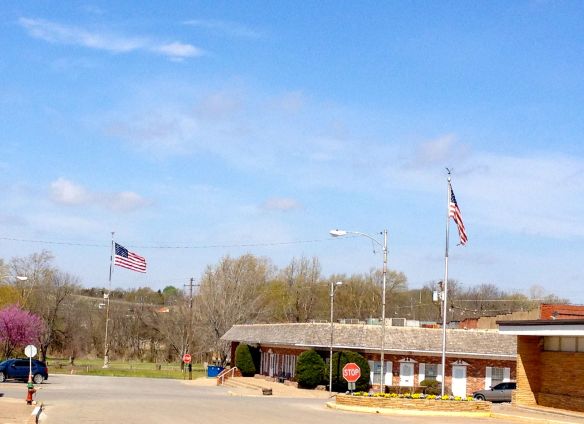 Small town Oklahoma. Say what you will about rednecks and Okies, or redneck Okies, but don’t say we’re not patriotic

“No, we can’t have another baby! Mom might come stay for a month again…”

Well, I’m back at the Ranch Pen. I have not lived in town for approximately thirty years, but I spent the past month in the small town in north-central Oklahoma awaiting the new grandson, Tater, and then helping out daughter #3 around the place afterward. Tater was tardy. He gets that from his dad and I hope it’s not an indicator of things to come, but he is so cute we consider him well worth the wait.

To keep us out of trouble, the grandsons, Kevman, Einstein, and I roamed the town on foot. The town is where the house of Olympic athlete, Jim Thorpe, is open to the public. (He won gold medals in 1912, which was even before my time.) Kevman heard somewhere that Jim Thorpe’s father was bitten by a rattlesnake and died, but I haven’t had time to fact check that yet. I also didn’t get a chance to tour the home, which I hope to do soon.

On our way to the Jim Thorpe park, we sometimes passed the funeral home. (I don’t know if it was the same one to process Jim Thorpe’s body.) Funeral homes usually try to avoid the appearance of gloom and death, but this one…yikes.

Kevman, Einstein, and I picnicked at Jim Thorpe’s park. Christi and Mark liked it there, too–or so the graffiti overhead led us to believe. 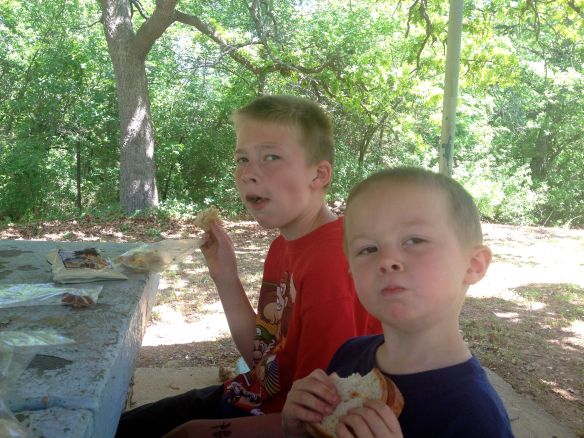 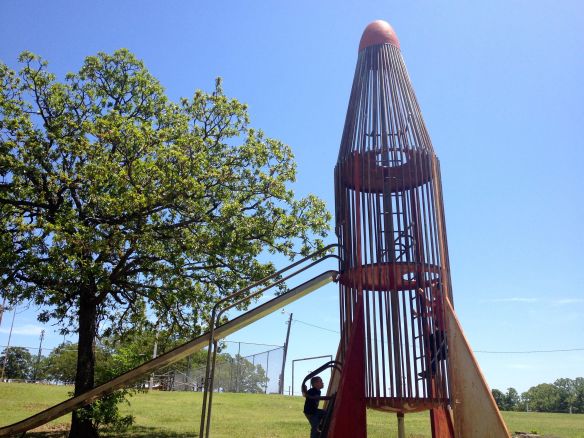 Rocket slide. I used to love those when I was a kid. Jim Thorpe must have, too…altho I wasn’t aware rockets were a big thing prior to 1912.

On our ramblings, we often passed God’s garage. Once we even stopped to browse, but did not purchase. 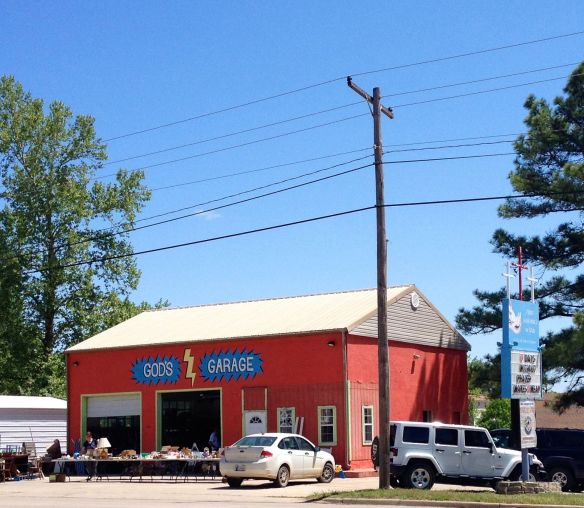 God’s Garage. He sure has a lot of stuff

No dogs in the yard? That house must be vacant

I don’t have government statistics on this, but I’m pretty sure the town has the most dogs per capita of any location in the world–certainly some countries where dogs are on the menu. Almost every yard has at least two dogs and if one listens, one will hear yapping from the Chihuahuas crowding the inside windows of the house. Down the road from Son #3’s house, a monstrously hairy dog lies in the street. One day we thought he was dead…but he eventually woke up when the grandsons shouted near his ear. Another time I spotted a yard so full of dogs I mistook it for a dog ranch. At least twenty dogs of all shapes, sizes, and lack of pedigree lived there in cheerful and littered abandon playing on several old sofas, weathered by the…well…weather. Later, the grandsons and I journeyed across town to take a picture of that virtual dog haven, but all of the dogs must have been inside the house. So unfortunate. It appears that some of the towns’  other dogs, including Chihuahuas, have banded together to form a feral dog pack. I spotted one of these feral Chihuahuas scratching through #3’s trash one early morning.

Can Naked People Jump On Trampolines?

The grandsons and I often walked to the library where they checked out a wide variety of reading material. One of the books was about earthquakes and volcanos. The book covered the Mt. Vesuvius eruption and showed pictures of some of the belongings unburied in the ash and lava–one of which was a statue of a naked man sitting in an attitude of contemplation. Einstein was fascinated and kept turning back the pages to contemplate the contemplating man.

Einstein:  Can we read about naked people?

Danni: No. Turn the page. Find a different book, even.

So, then we came to the day of the new trampoline.

Danni: (as an ultra-conservative Christian woman, compelled to discourage fun and public nudity) Absolutely not! Gross!

Oh, yeah, and then there was the E Coli in the water…

Right after I arrived–and had drank several glasses of tap water–the citizens found out E Coli had contaminated the water. E Coli can cause nausea, diarrhea, headaches, and other symptoms. The schools and eateries closed down. Everybody was peeved. I kept remembering those glasses of water in my system and those other symptoms. A day or two passed awaiting the bony hand of death, but finally I gave up and the grandsons and I tottered down to the library so I could use the wireless for my phone. We sat on the bench outside where a young guy approached with a paper, pen, and camera.

Guy: Do you mind if I ask you some questions about the water?

Guy: (looking up and down the deserted street) If you’ll be here a few days can I ask you some questions?

Danni: I guess. You really ought to go inside and talk to the librarian, though.

But he asked a few questions then wanted a picture.

Danni: (still has no clue the Guy is a newspaper reporter and not just nosy. Aren’t they supposed to flash a badge, or something?) Um…I don’t know what you’d want THAT for.

Danni: (dragging the grandsons into the picture) If they can be in it.

Guy: (takes picture) Do you know where the foot traffic would be in this town?

Why didn’t I ask who the Guy was and why he was so nosy, you ask? I don’t know except I’m from the country and it never occurred to me. 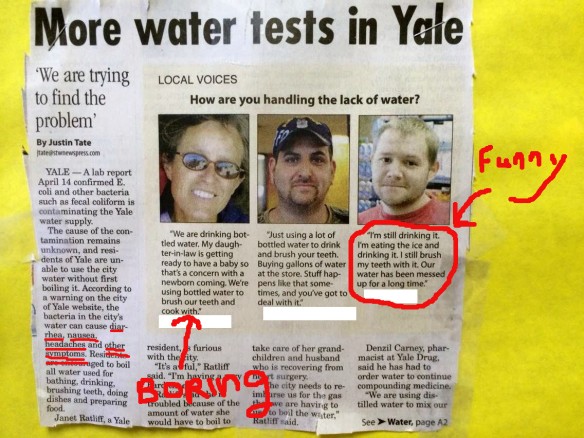 The guy on the right? Priceless.

Not merely nosy, but treacherous, too, that Guy cut my grandsons out of the picture…but if you look closely, you can see parts of them near my ears. The E Coli problem was resolved in a week’s time and it was no more than a nuisance. Many people in this old world would be ever so grateful for that water just as it was, including the citizen on the far right of the clipping.

So, hm…let’s see. That covers most of the highlights of my visit. Clean-ish water and the time with my family and the new grandson was a blessing. Now, I’m glad to be back on the home place bossing around Gramps and our one lonely looking (and somewhat feral) dog, Nellie. Oh! I can fix Nellie’s problem. Excuse me just one second while I grab my phone to set a reminder… 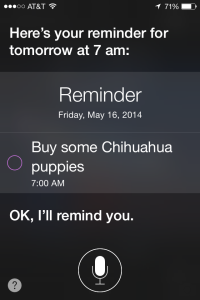 Until next time, God bless all y’all and enjoy this video I helped the newest grandson make entitled I’m Pro-life. He did a great job.

*Tater McGriffith doesn’t necessarily endorse my blog, I just love him to pieces.

6 thoughts on “Meanwhile, Back At The Ranch (Pen)”