Gramps and I hope all of you had a wonderful Christmas with family and friends. We did and I made the blueberry lemon sweet rolls pictured in this post for Christmas morning. They were SO yummy. Just as good as they looked in the picture.

As promised, I’ll finish out December with the final two most viewed posts of the year. #2 is one from last February entitled Henry Wadsworth Longfellow and Hey! What’re You Doing To My Tractor?

This post has had views from all over the world and I’m not sure what drives them, exactly. Are farmers from South Africa, or Canada, or Romania looking at the pictures, shaking their heads and chuckling because they’ve seen those types of wrecks on their farms? Or, oh my goodness…are those their machines?!

Perhaps rabid Henry Wadsworth Longfellow fans are gnashing their teeth at the desecration of his great poem, The Wreck of the Hesperus? Or, (how could it even be?) they like my rewrite, The Wreck of the Old Case International Combine, even though it’s kinda dumb and sadly out of meter?

My guess is that all around the world, an army of small-ish farm women have wrestled around huge old four-wheel-drive tractors and they are happy to see they aren’t the only ones who have accidentally climbed the grain bins.

Whatever the reasons, thanks so much for reading and I hope y’all enjoy it again.

I’ve recycled the following pictures from an email–an oldie, but a goodie–that circulated amongst us ranchers and farmers a year or two ago. We all chuckled. And winced. And remembered when one of the kids, or the ex hired man, or even–goodness sakes–the owner/operator buried the tractor.

For those of you who drive around on paved streets and highways, I’ll attempt to explain the wrecks below. 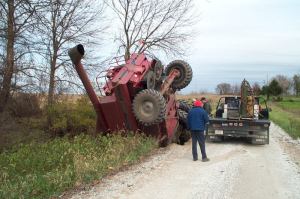 The skipper he stood beside the helm,
His pipe was in his mouth,
And he watched how the veering flaw did blow
The smoke now West, now South.
Then up and spake an old Sailòr,
Had sailed to the Spanish Main,
“I pray thee, put into yonder port,
For I fear a hurricane.
“Last night, the moon had a golden ring,
And to-night no moon we see!”
The skipper, he blew a whiff from his pipe,
And a scornful laugh laughed he.”
Henry Wadsworth Longfellow (And if you can believe Wikipedia, his granddad’s name was Peleg Wadsworth. Why don’t we ever hear cool Bible names like that anymore?)

The conversation between Dad and the kid on the cell phone went like this:

“The kid sat high within the cab,
his earbud in one ear,
and he took the call from his old man,
and never missed a gear.
Then up and spake said old man,
who’d drove that road before,
Don’t go that way, son, he said,
for I fear the road is sloughin’ off  ’round that tin horn in the wash ’cause the county’s too cheap to pay for a longer piece of culvert.
The kid pocketed his smart phone,
a scornful laugh laughed he,
For he would show his old dad,
a real combine man he’d see…”

(And I humbly beg your forgiveness for messing up your really good poem, dearly departed Mr. Longfellow) 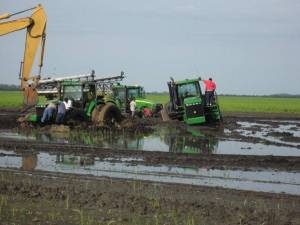 2. This wreck we’ll call Some Dumb Guys With Tractors. The farm wife is taking the picture for future evidence. She is saying, “Seriously? I can understand one tractor, but three? And now the trackhoe, too? But, hee hee. This picture is going to get me that new saddle. And maybe a new riding lawn mower, too.” 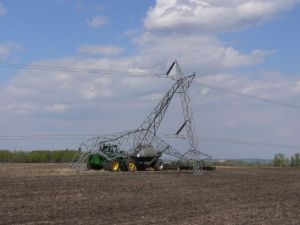 3. This wreck we’ll just call, Hired Man As Soon As They Get The Juice Shut Off To Those Wires And I Get My Hands On You, You Are Dead. 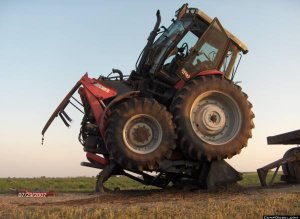 4. This one we’ll call, How Many Times Do I Have To Tell You To Pick Up The Bucket Before You Let Out The Clutch? 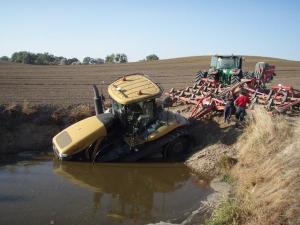 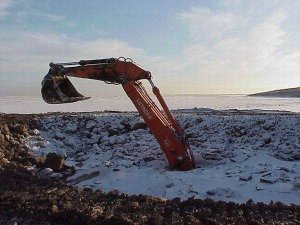 6. Should we call this one, Wife Buries the Hatchet With the Handle Stickin’ Out But Husband Buries the Trackhoe With the Bucket Stickin’ Out…or what? I’m at a loss here. 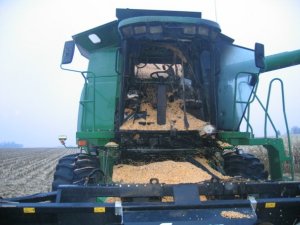 7. And this one…my goodness. Don’t Ever Hire Somebody to Harvest Your Corn Who Huffs Hairspray While Smoking ?

(It appears both the back and front windows have blown out, allowing the corn in the grain tank to spill through the cab and onto the platform.) 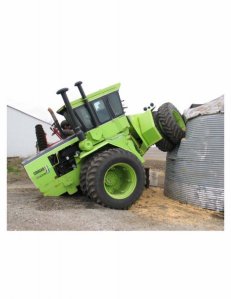 8. Ah, and lastly, a Steiger tractor wreck. I’m very qualified to comment since I’ve had many adventures in an old Steiger tractor. (But not this one, I promise.) The scene could have gone like this:

“Whoa.” Me stomping on the clutch and brake.

“Whoa, now.” Jamming on every lever in the cab with hands and feet. Starting to sweat profusely. “Oh, Lord…I said whoa, now!”

Two sets of back duals hit the grain bin and start to climb. “LORD HAVE MERCY, WHOA!”

Using both my boots, I finally shove the gear lever out of reverse. Tractor lurches forward, slamming nose into gravel. Motor dies. I slump over steering wheel, shaking. Sitting at odd angle. Sneak peek over shoulder.

This is not my fault. I told him to fix the brakes.

Well, I hope you enjoyed this re-run of the #2 most viewed Ranch Pen post of 2013. You can let me know in the comments why you think people from around the world look at it.

God bless y’all until next time when I reveal the #1 most viewed post of 2013. Since this is a silly post, I’ll ask you to enjoy Christian comedian, Tim Hawkins, doing a silly spoof called Pretty Pink Tractor.