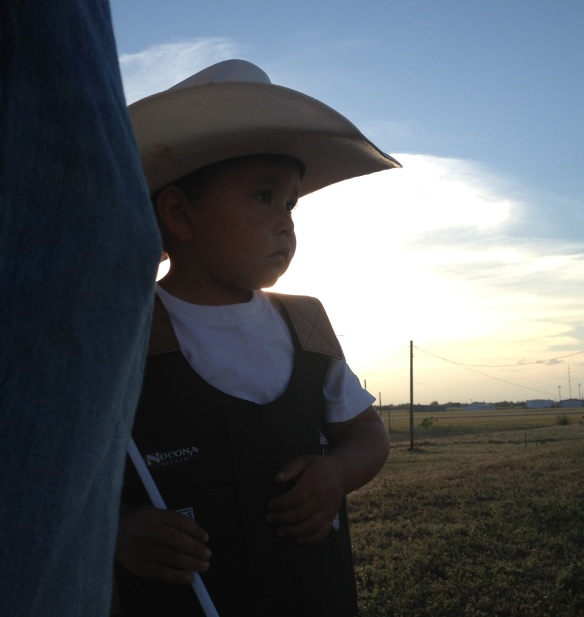 Grandson, Roper, at the rodeo.

The roundup club in our neighboring town sponsors a rodeo every May. This year, Gramps’ and my grandson, Roper, wanted his dad to sign him up for the mutton bustin’ competition. For those unfamiliar with our countrified amusements, mutton bustin’ is just for the small boys and girls. Whichever kid rides a sheep longest, wins.

He had his hat on. He had his vest on. He had his chaps and boots on. The chicks were diggin’ it. Except for me, his nana, (and possibly his mama, too,) with our heads down, praying fervently the experience would break him from wanting to ride rough stock ever again as long as he lives.

Roper, if you can’t run with the big dogs, stay under the porch

Gramps accompanied Son #1 and Roper to the bucking chutes where Roper promptly decided he didn’t want to mutton bust no more.  However, Roper’s dad is old school and believes in follow through, so he plopped him onto the sheep, told him to hang on tight, and the cowboys threw open the gate.

Roper stayed on the big ewe for all of two seconds then his dad helped him up from the arena and dusted him off. Instead of bawling like a baby, Roper faced the stands and raised his hands, giving his wildly cheering fans the Lane Frost wave. (For those who don’t know who Lane Frost was,  he was a champion bull rider from Oklahoma who was killed after a ride when a bull hooked him with his horns. He gave the crowd his trademark wave after his rides.)

Afterward, all the cowboys behind the chutes told Roper, “Way to go, buddy,” and when he got back to the stands, the rodeo clown congratulated him with a high-five and a “Good ride, Cowboy.”

Since then, Roper has been riding tall and I fear instead of breaking him from wanting to ride sheep, calves, broncs, and bulls, the experience may have had the opposite effect.

His nana ain’t done praying, yet, though.

God bless all y’all and enjoy the Oak Ridge Boys doin’ Thank God For Kids (and Grandkids, too).

*These artists don’t necessarily endorse my blog, I just like ’em.