Smoky. What a handsome pair of socks he would’ve made

Don’t ask me why this is, but ranch and farm families often have a yard full of dogs, and then one or more inside the house, too. We just can’t get enough dogs.

For years, we McGriffiths kept chihuahuas in the house. The most recent was the late Smoky, pictured above. Smoky had an unfortunate encounter on a gravelled road with a pickup. But he was cute, wasn’t he? Gramps and I really miss him. As I shall soon illustrate, however, the McGriffiths lean heavily toward practicality rather than sentimentality.

When Son #1 was about seven-years-old, we had a chihuahua named Cookie. She was a great little dog, but unfortunately she was elderly and developed some health issues. Her days were numbered.

One night, my three little sons said their prayers then I sent them to bed. I then collapsed into my chair in the living room of our old farm-house to read a book. Son #1 was in my range of vision as he climbed the ladder to his bunk bed with Cookie tucked under his arm.

“Hey, Mom,” he called into the living room, “if Cookie dies we could skin her out and make me some socks.”

The McGriffiths were way ahead on the repurposing movement.

Cookie eventually disappeared. Animals often go off by themselves to die, particularly if they don’t want to end up as socks. But the point is, even at age seven, Son #1 had a practical view of death. As a farm kid, he’d been acquainted with birth, life, and death all his life. 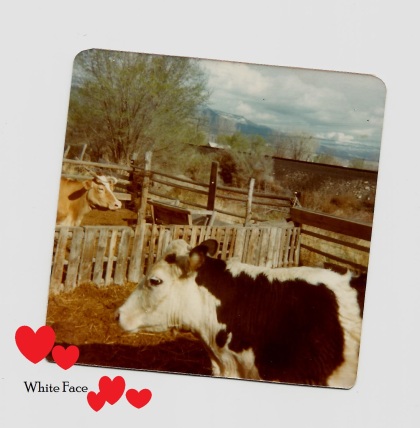 Growing up on a farm in Colorado, I had been acquainted with the same things, but when I was twelve-years-old I fell in love with the cow pictured above, named…wait for it…White Face. (The guernsey in the background was the family milk cow, Tiny.)

One day, my dad announced the butcher man would be out to the place to, well…butcher…White Face. I immediately devoted the full force of my twelve-year-old angst to saving White Face’s life.

I bawled. I begged. I was sent to my room pouting. I drew bad sketches of the cow. I wrote her name, White Face, over and over in my sketchbook. In big cursive and little cursive. With curl-i-cues and without. IN CAPITAL LETTERS. and small letters. I launched into a hunger strike.

And you know what? My dad refused to be held hostage by my twelve-year-old emotions. For some crazy reason, he was more concerned with filling his kids’ bellies the best way he could than with appeasing me. (I didn’t have a cell phone, either. Nor a tv. I had to read books. Imagine.)

If my dad had given into my demands I might’ve mailed in my donation to some animal rights group and fine-tuned my emotional manipulation skills. Instead, the next morning he made a strong recommendation for me to adjust my attitude to his satisfaction…which I promptly did. Outwardly. But inside, I was still sketching furiously and continuing my hunger strike.

That, however, only lasted until suppertime when the smell of White Face  frying in the pan overcame me.

I know. I feel so guilty. So, to make up for it–while I can’t go along with the Meatless Monday Crusade since I love meat–I want to start my own crusade:

Until next time, God bless all y’all.